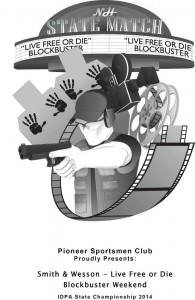 LOS OSOS, Calif. – Apex Tactical Specialties, a leading manufacturer of aftermarket parts and specialty services for revolvers, the Smith and Wesson line of M&P pistols, and more, has signed on as a major sponsor of the Blockbuster-themed 2014 Smith & Wesson Live Free Or Die State IDPA Championship taking place this weekend.

Hosted by the Pioneer Sportsmen Club in Dunbarton, New Hampshire, the Live Free Or Die State Championship kicks off Friday, October 17 and wraps up Sunday afternoon. In addition to determining the state title, the championship will also serve as the final leg of the popular King of New England contest which is also sponsored by Apex Tactical Specialties.

“Apex is proud to support the Live Free Or Die State Championship, as well as the King of New England series. We are big fans of IDPA competition and appreciate the great work being done by the IDPA shooters in New Hampshire to make this one of the premier events on the IDPA calendar,” said Scott Folk of Apex Tactical Specialties.

“We’re excited to have Apex back as one of our major sponsors, and very pleased to be the final leg of the very popular King of New England series which they also sponsor. This weekend is set to be the highlight of the 2014 IDPA schedule here in the Granite State,” said Jon Wolfe, match director for the championship.

You can further connect with the IDPA community through IDPA’s social media, such as @OfficialIDPA on Twitter and ShootIDPA on Facebook, Instagram, Pinterest and Tumblr, or check for regular news and updates on the organization’s DOWN ZERO Blog.