We had a great time this weekend shooting the Southwest Regional. Lisa and I spent Saturday at the Hogue Action Pistol Range competing with just under 100 other shooters. It was a tough but fun match. Our squad was filled with jokers and comedians; there was never a dull moment.

While on the "Pro Am" stage, Lisa was managing the pink spray paint can for one of the target arrays, she picked it up off the ground and the side of the can burst, spraying pink paint all over her and her gun......Don't worry, the gun is perfectly OK.....Lisa on the other hand, got a really cool paint job on her hearing protection, glasses, shirt and shoes. The Range Master happened to walk up to Lisa, only able to see the side that wasn't covered in paint, when she turned so he could see the mess, he nearly doubled over in laughter. It was priceless. 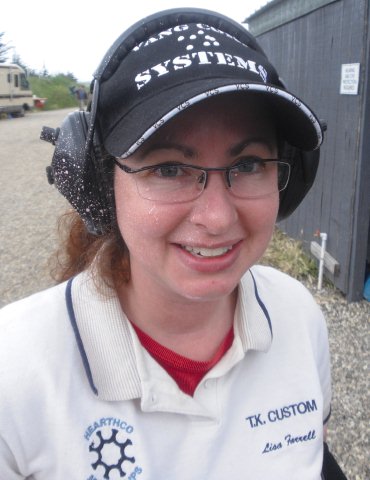 I'm proud to say that approximately 85% of the shooters at the match shot guns with Apex parts or work in them.

During the awards ceremony, we had 8 people sitting in our row, by the time all the plaques were handed out, everybody in our row had a plaque. Simultaniously, we all held out plaques up and said "Bingo" over the noise of the crowd....unfortunately there were no photos taken of this spectacle.