An Update From Apex On The FN 509 Trigger

Where is the FN trigger? And why is it taking so long?

We’ve had a ton of questions lately about the status of our Flat-Faced Action Enhancement Trigger for the FN 509. We initially started work on this trigger – for the FNS – back in 2014 and quickly discovered that there were several obstacles to overcome in order for us to deliver a drop-in trigger kit that end users could install themselves.

At that time we stepped back from the platform, and had it not been for requests from a close friend, who at the time worked for FN, we would have left it on the drawing board and never really addressed the project again.

Fast forward to early 2016. It was at this time that our friend asked us to please revisit the FNS line of pistols. Since I hold this friend in such high regard, I sat down with Apex’s CEO (and my co-owner) Randy Lee to discuss the idea of resurrecting the project and he agreed that we should give it another look.

Developing a drop-in trigger for the FNS, and now the FN 509, requires extensive design in order to overcome three significant issues. These can be considered exceptional design challenges, especially considering no other trigger maker is taking on development of a replacement trigger kit for the FN pistol.

Here are the three issues we’re tackling, which hopefully helps explain the delay in releasing the new trigger.

It was at this point that we realized we had to come up with a trigger bar re-design. This set us on a path of studying the system to truly understand the differences between machined parts and stamped parts and the forces involved in each.

We spent months going back and forth with our chosen stamping shop discussing materials and design elements to make the best trigger bar possible. After many samples and alterations to the stamps, we finally settled on the design, material, manufacturing technique and finish.

Once the design was finalized we started the patent process which took quite a bit of time as well. We were successful in filing for and receiving Patent Pending status on our trigger bar design.

While the trigger body design was relatively easy, when compared to that of the trigger bar, mid-way through design and testing of our trigger we learned that FN was going to release the FN 509. We realized that the FN 509 would be the company’s new flagship pistol and we needed to wait until we could get our hands on the FN 509 to confirm that our trigger would work in it as well as the FNS.

The FN 509 required us to make some changes to our own trigger body design, and though easy, those took time to get dialed in – particularly in conjunction with an evolving trigger bar design.

The third issue we faced was the sear. Initially we did not plan to incorporate the sear into the trigger kit, but instead develop it after release of the trigger as an additional upgrade item.

The factory sear is a great component, but we felt that a few changes would make it even better. And as our timing got pushed back it made much more sense to accelerate sear design and development to offer it in a full upgrade kit with the trigger and trigger bar.

The new Apex sear design for the FN 509 reduces the trigger pull weight. This, of course, meant we needed to adjust the trigger’s design accordingly. Additionally, the sear is also a stamped piece, and as we are having to work with an outside stamping company the process takes longer than that for a machined sear like those we manufacture in-house for the M&P line of pistols. 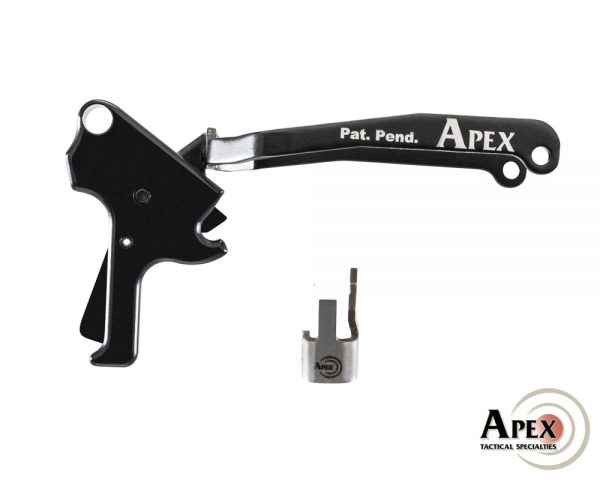 So, where does that leave us?

As of right now, the trigger, trigger bar and sear are all on their way to Apex as final, preproduction prototypes. We will begin our testing protocol in the next couple of weeks, and provided there are no additional alterations required, we should be good to go and start in on full production of the new trigger kit.

As usual, we will announce the release dates of our products in due course.