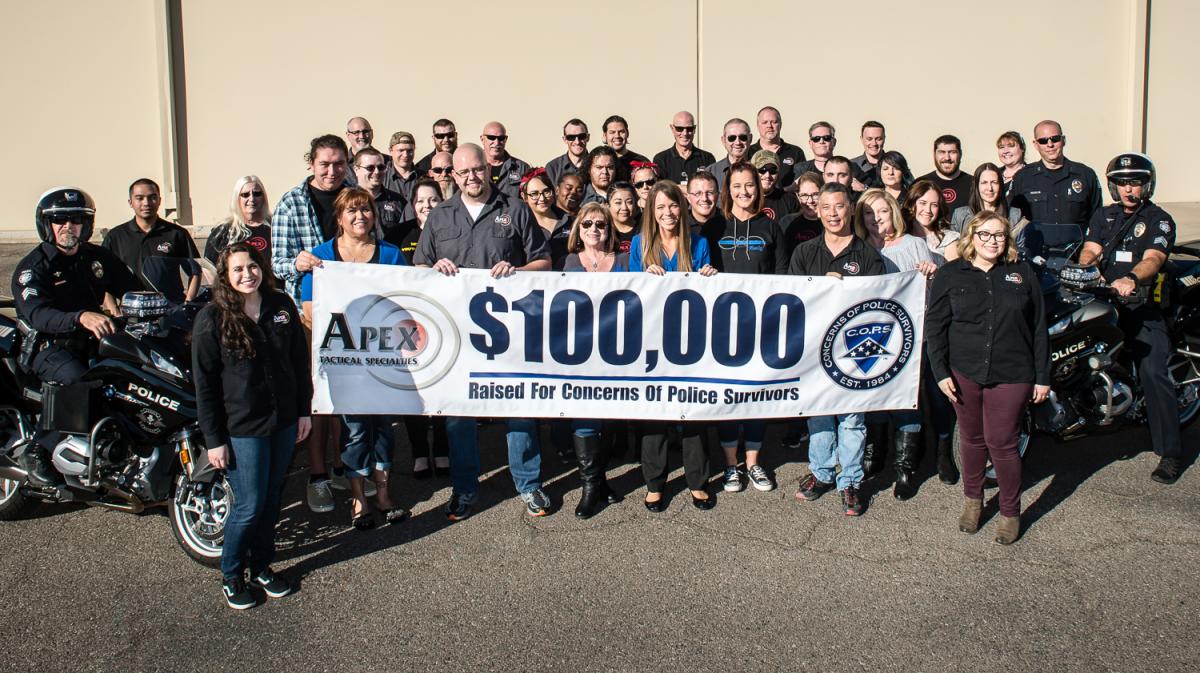 PEORIA, Ariz., – The owners and employees at Apex Tactical Specialties gathered to celebrate raising $100,000 for Concerns of Police Survivors (C.O.P.S.) through the sale of the company’s Thin Blue Line Series of triggers. Joining Apex were Lauren Crisman, director of development for C.O.P.S., six local survivors who lost family members in the line of duty, and representatives from the Peoria Police Department.

Apex launched the Thin Blue Line Series on October 31 in 2016 hoping to raise a few thousand dollars for the nationwide not-for-profit organization whose mission it is to rebuild the shattered lives of the survivors who have lost a loved one in the line of duty. Within a few weeks it was clear that sales would far exceed Apex’s initial expectations.

“When we first spoke to Concerns of Police Survivors we told them we were hoping to be able to make a small but meaningful contribution at the 2017 SHOT Show in Las Vegas. But by the time our industry’s trade show arrived, we had already raised $15,000 and were well on our way toward $30,000,” explained Scott Folk, COO of Apex.

At last year’s SHOT Show Apex presented Dianne Bernhard, executive director of C.O.P.S., with a check for $15,000. The funds were raised through the sale of Apex’s Thin Blue Line Series of products with 25% from each sale earmarked for C.O.P.S.

“We had no way of knowing when we launched the Thin Blue Line Series that these would be so popular with customers. Each month Scott and I would look at the numbers and were amazed at the results. We can’t thank our customers enough for making today possible,” said Randy Lee, founder and CEO of Apex.

“Apex's commitment to the survivors of America's fallen law enforcement officers is nothing short of amazing! Because of their support, C.O.P.S. can continue to help these officers' families and co-workers for as long as they need us,” said Dianne Bernhard, executive director of C.O.P.S.

“C.O.P.S. has always had the mission to rebuild shattered lives of survivors whose loved one dies in the line of duty. With 140-160 officers dying each year on average, our membership has increased to over 47,000 people who have identified themselves as survivors,” explained Bernhard.

About C.O.P.S.
Concerns of Police Survivors is a nationwide not-for-profit organization with 53 Chapters across the country. Members of C.O.P.S. are always prepared to help survivors when they need it, where they need it. The organization’s mission has always been to “rebuild shattered lives” of the survivors. C.O.P.S. has a membership comprised of more than 47,000 people nationwide who have identified themselves as survivors nationwide. Unfortunately, that membership continues to grow as an average of 140-160 law enforcement officers have died in the line of duty every year.