If you're hunting monsters, then this is the wheelgun for you. Especially if your name is Earl Harbinger.

This custom Smith & Wesson Model 625, a .45 caliber revolver, won't actually find its way into Earl Harbinger's hands because, well, Earl doesn't exist. He's a fictional character. And a Werewolf, which is kinda cool.

Instead of Earl's hands this gun found its way into Larry Correia's.

“The custom grips are a work of art. This is a gun worthy of a fictional bad ass!”

Inspired by the overall MHI universe, Earl Harbinger specifically, and a deep-seated love for revolvers, this Model 625 was built for the author by super-fan Scott Folk, the co-owner of Apex and a world-class gunsmith in his own right.

For those unfamiliar with Apex's background, the wheelgun, as the kids would say, is our jam.

Most know Apex as having its start in upgrading the M&P. This is correct in terms of the company's work designing and eventually manufacturing aftermarket gun parts. But prior to the introduction to the Fully Machined Sear for the M&P, Apex was – and still is – the premier revolver house in the country.

Apex is the place where those 12+ pound DAO revolver triggers Smith & Wesson is known for go to die. If you've ever felt a silky smooth revolver with a four pound double-action then you're familiar with Apex's work.

Putting these all together into the Model 625 build is what separates the gunsmiths-in-name-only from an actual expert. Here's how they all came together.

The Apex parts don't require much explanation other than to say that they are engineered so that when installed they totally transform the gun. That's not an opinion. It's a fact.

The Apex rear sight obviously pairs with the Dawson Precision front sight, which was installed into the Weigand front sight mount recessed into the top of the barrel.

The barrel itself is custom fit from a Schillen blank that was hand-profiled on a mill to a beefy, tapered profile that feels completely appropriate for a .45 caliber handgun carried by a guy killing monsters. The lack of an under-barrel rail, and a front sight that is a simple black sight and not a tritium filled night sight, reflects the fact that low-light shooting isn't an issue...for a Werewolf.

The stainless cylinder is hand chamfered and two crane lock ball detents were added. Quick release of the cylinder is aided by the addition of a Hogue short cylinder release, the kind popular among competition shooters who rely on fast handling revolvers.

The grip is a smooth wood laminate from Hogue, which customized the grip for this build by adding the inlaid 'Puff Exemption' tag (#03003) that was wire EDM'd in half by Apex for use in both the right and left side of the grip.

Once all the work custom machine work was complete it was time to have the gun refinished. While the cylinder would remain stainless, to create a contrasting look the stripped frame was sent off for a black Melonite finish. Once it made it's way back to Apex the final touch was a bit of laser engraving.

The left side reads "Evil Looms, Cowby Up, Kill It, Get Paid" along the barrel with the Apex logo lasered just under the Hogue cylinder release.

The right side of the frame has the Monster Hunter International logo along with "Harbinger" lasered on it, and the barrel features the Latin phrase "Sic Transit Gloria Mundi" which translates to "Thus passes worldly glory." 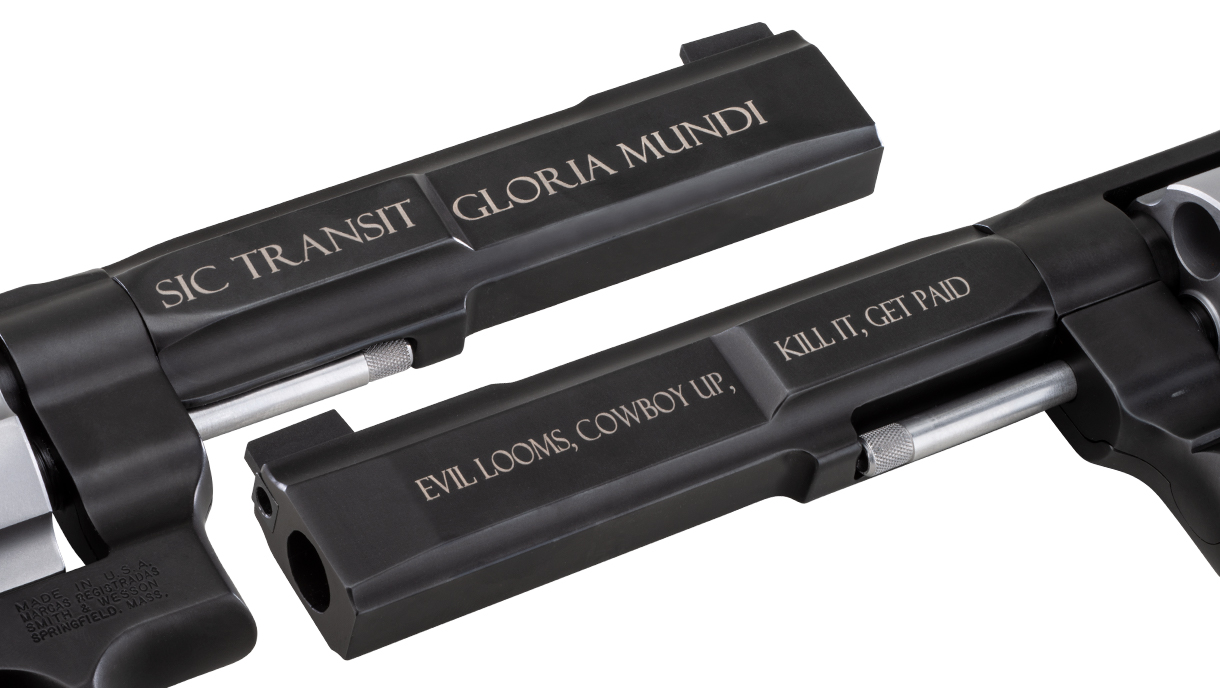 And finally, under the grip on the left side of the frame is "S. Folk 11-08-19" to note when this custom revolver was completed and who did the work.

The custom-built Model 625, with it's presentation case, is now in Larry Correia's hands where it is likely one of the more collectible pieces of MHI memorabilia, if guns are ever considered memorabilia. And its value will only rise over time.

So, what does a totally custom-built revolver like this go for? Great question.

Assuming you could convince Scott to build another, or something similar, you're looking at a cool $3,100 to $3,300 BEFORE adding in the cost of the Model 625 itself. Including the gun, you're probably not hunting monsters for less than four grand. 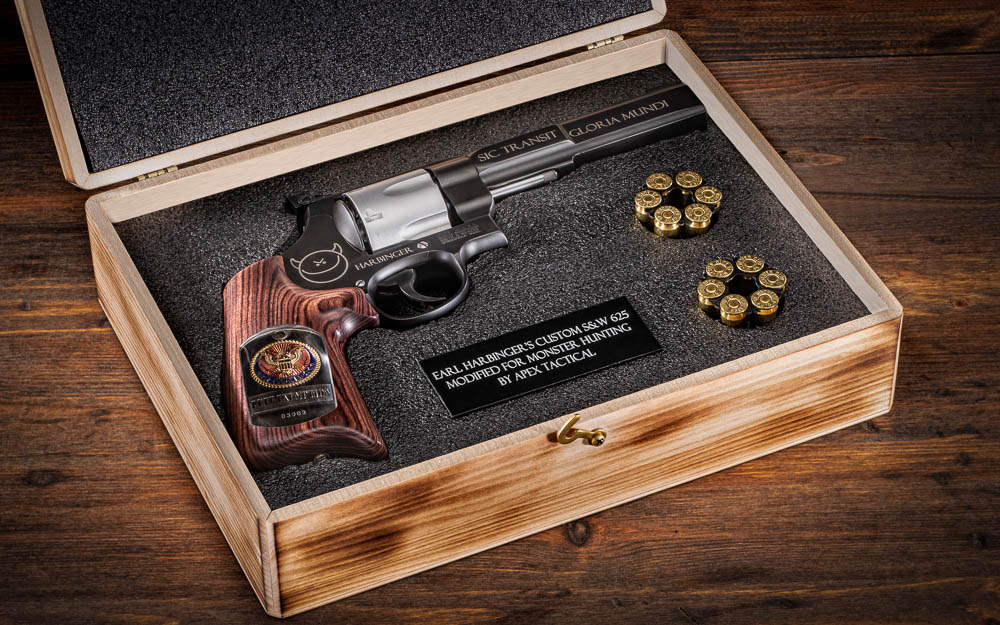