My philosophy
If metal rubs metal; you need grease between the parts.

We lubricate guns simply to allow the parts that rub on one another to move smoothly. Modern combat handguns are not intended to be run without lubrication. A previous customer of mine made this mistake recently and is now spending a lot of additional money to get his gun in working order after degreasing his gun, dry firing 1,000 times then shooting it after it came back from getting action work.

Application Tools
I had an empty “Shooter’s Choice” syringe sitting around so I filled it with my favorite grease. Any method of application will work just fine. I use about a half-ounce of grease a day while working on guns and was in need of a way to keep grease readily available without having to unscrew the top of a jar or bottle and I found the syringe to work perfectly for my applications. What I like best about the syringe is that I can put the grease directly where I want it, such as inside certain springs and the corners of frame rails.

Product options
Any gun-grade grease will do the trick. I personally prefer to use Lubriplate, Shooter’s Choice grease including a cool syringe for later use or Slide Glide. The grease in the following pictures is a lithium/moly-based grease that I’m experimenting with, details available soon. 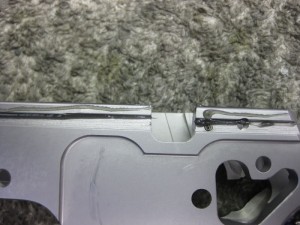 Notice how there is a greater amount of grease near the muzzle end of the gun than at the rear. This is intentional. There is only so much space in the tolerance of the pistol for lubrication to reside. Since the slide goes on back to front it’ll push the remaining grease to the back of the frame and bunch it up on the back of the slide when the slide it closed. 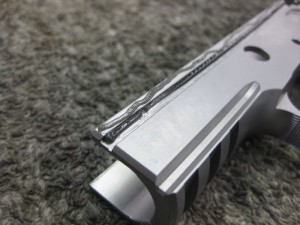 You can see that I didn’t use as much grease on the side of the rails as I did on the underside, this is purely because it’s not generally as necessary. The top also gets a layer of grease to protect against galling and excess friction. 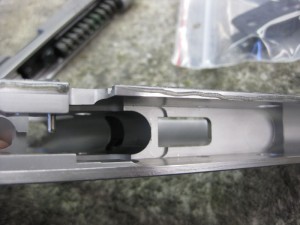 Different Mission, Different Approach
For my every day carry (EDC) I grease the rails, put the slide on, run the action a couple of times, remove the slide then wipe the rails off to remove the large amount of bulk. I leave the grease on the under side of the rails alone when I wipe them off, the slide normally holds enough grease to keep things running.
For an EDC, remember your gun goes everywhere you do and is exposed to everything you are, hot, cold, humidity, dust, taco shells from that ill advised taco you ate while trying to talk on your cell phone while driving last week….everything. So if you have grease squirting out of every crevasse on the gun, you’ll be attracting the general detritus of everyday life into your gun. Generally, that crap doesn’t make it in far enough to do any kind of damage unless you’re irresponsible enough to never clean your carry gun.

For open carry EDC for law enforcement, you gotta start thinking a bit more. I’ve had a couple of cops bring me their duty pistols for work and I’ve been astonished at what I’ve found. When I cocked the hammer of one of them, I found three pieces off bitten of finger nail and a corner of plastic from a plastic ketchup packet….”Come on man, clean your gun once in a while” actually escaped my mouth. I asked how long it had been since he last cleaned it and he told me it had been a couple years, “I hardly ever use it, I figured it was still pretty clean”. His gun was absolutely bone dry and I found dust on the frame rails as opposed to lube.

Competition
Clean it after every 200 to 400 rounds. Most of the time a big match, or a day of shooting will be enough of a work out that your gun will need cleaning.

EDC with frequent use including open carry
Clean it after every time you use it. If you’re going to depend on that gun to save your life, you want it to work the first time you pull the trigger, so keep it clean and lubed.

EDC with little to no use
Clean your gun at least once a month, it’s more of the same of your gun being needed to save your life. Even without use, your gun needs to be cleaned and re-lubricated, so give it a quick bath and make sure it’s ready when you need it. There are 720 hours in a 30 day month, I think you can afford to spend 1/720 of a month cleaning your gun every month, it’s cheap insurance.