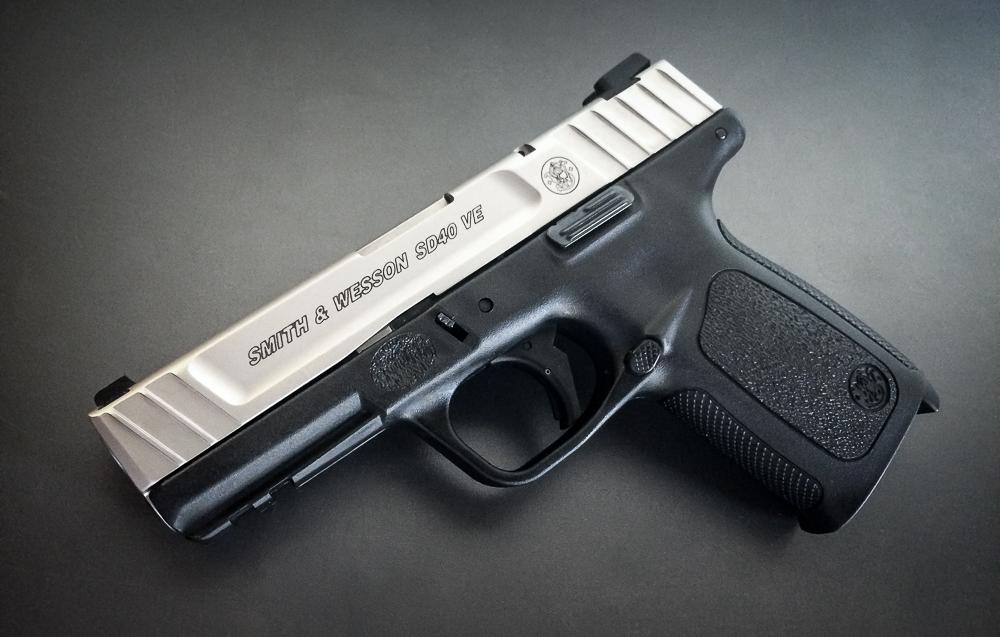 Aside from its predecessor, the oft maligned Sigma, few pistols in the enormous Smith & Wesson catalog are so looked down upon as the SDVE series. Thanks mostly, if not entirely, to its trigger.

Designed with a fire control system meant to be transitional from the long rolling pull of a double-action-only service revolver to something shorter, the SDVE’s  trigger seems more akin to that of a wheelgun than what has come to be expected in today's modern striker-fired pistol. And it’s that heavy, long pull that most shooters cite as the pistol’s primary weakness.

Unfortunately for the SDVE, shooter aversion to the trigger ends up painting that entire model as a less than desirable pistol. An overall negative perception likely reinforced by Smith & Wesson’s extremely affordable $389 suggested retail price point. Because let’s face it, anything that cheaply priced can’t be good, right?

In reality, the SDVE is a very solid and solidly built pistol. And while the M&P, with all its variants, and the M&P Shield, with its monster sales, garner all the gun magazine attention, the SDVE rightfully deserves a spot on the list of top blasters from Smith & Wesson.

It also deserves a spot on any shooter’s “Guns I Haven’t Considered, But Should” list. And here’s what you need to factor in when considering the SDVE.

Quality...
Despite its bargain status, which might suggest the exact opposite, the SDVE is actually a quality built pistol. It’s both durable and remarkably reliable which has a lot to do with how well it’s manufactured. The SDVE is boring in its consistency of performance and, with the exception of its trigger, has legit curb appeal in the retail display case.

Simplicity...
The SDVE is the “King of the No Frills Pistols.” It is essentially just one pistol model offered in either 9mm or 40S&W. The other models you find listed are just state compliant variations of the one pistol. There are no color options beyond the two-tone look. No differing grip texture or frame color options. And it was never going to be a candidate for some signature model or Performance Center roll out. Can you imagine a Jerry Miculek version? No, and neither can Smith & Wesson.

The design itself is equally simplistic, and that again is where the SDVE shines. For the first time gun owner or those fearful of an overly complex assembly/disassembly process, the SDVE is the ideal pistol. It’s a well engineered pistol that avoided falling into the trap of becoming an over-engineered pistol. There are plenty of those out there, and for far more than the SDVE’s $389 MSRP.

Reliability...
Thanks to the simplistic design and the overall quality of the manufactured pistol, the SDVE is actually one of the standout work horses of the Smith & Wesson pistol line. This gun just goes and goes. For all its perceived shortcomings, the SDVE flat-out works. Just ask any SDVE owner.

Accuracy...
What most people miss when shooting the SDVE is the pistol’s inherent accuracy. For those lost on the weight and length of pull of the trigger, it’s easy to miss how accurate the gun is. With its mere 4.00” barrel, the SDVE can shoot circles around the M&P, particularly in 9mm where the lack of dwell time and resulting early unlocking has plagued Smith & Wesson flagship pistol.

With the SDVE, dwell time is not an issue. And when in the hands of a shooter who can manage the long, heavy trigger the SDVE is a tack driver. So much so you could win numerous range bets with it.

Utilitarian...
Combined, these aspects, along with its extremely affordable price, position the SDVE as an amazingly utilitarian pistol. It can go anywhere, take a beating and keep performing. While no gun that was ever called “utilitarian” was considered sexy, if you look past what the SDVE is not for what it is, you’ll discover the perfect truck gun. Or bedside backup. And for many, the ideal carry option.

Trigger...
As the kids say, “but dat trigger, tho.” Yeah, on a scale of 1 to 10 it falls squarely on “Sucks.” For those wanting every striker-fired trigger to be as crisp and short as that of a 1911 (a good one, anyway), the SDVE’s trigger is horrible. However, it’s unfair to compare the trigger to what it is not, and more importantly to what it was never designed to be. But nonetheless, people do.

Fortunately the pistol’s main and only real weakness which holds it back in any popularity contests, can be overcome. Apex offers both an SD Spring Kit (available here for $20.95) and an SD Action Enhancement Trigger (available here for $39.95). Either one can be installed in order to improve the trigger pull, but combined these two aftermarket options deliver a significant upgrade.

The polymer SD Action Enhancement Trigger replaces the factory hinged trigger and features a center mounted pivoting safety. The smooth face trigger with a solid body produces a more comfortable trigger for the shooter’s finger while reducing pre-travel by 20% and over-travel by 10%. The SD Spring Kit reduces trigger pull weight by approximately 2.0 lbs., helping to smooth the pull while also improving the trigger reset. 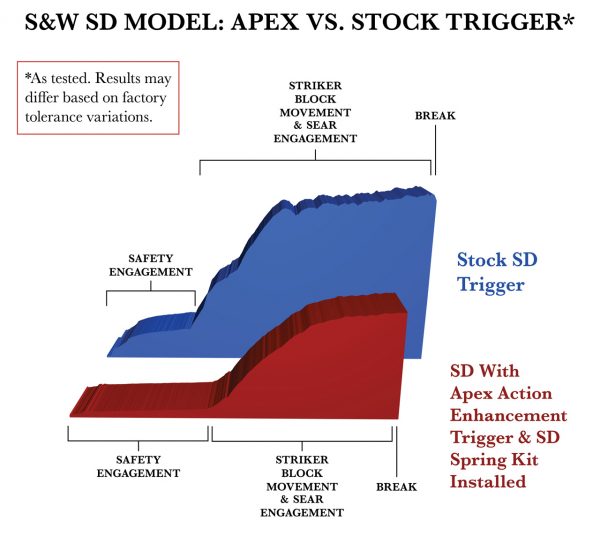 These upgrades won't put the SDVE out ahead of the M&P (an Apex'd one, natch), but they will change your initial opinion of the gun and likely turn it from a gun with a month-to-month lease in your gun safe to one settled in for the long haul.